When Monica Harwell began a program that trained women to work at Con Edison, the energy utility provider for New York, she thought her dreams of having a job working outdoors would finally be realized.

She learned to climb utility poles, received electrical training and assisted other workers in the field. Harwell was one of the first women on her team and one of the sole black employees working with crews that were almost all male and white.

But the experience came at a price.

"People had bets on me," Harwell said in an interview with CNNMoney. "They didn't think I would make it."

The insults turned into even bigger issues that she said kept her from advancing. Eventually, she filed a harassment and discrimination lawsuit with the Equal Employment Opportunity Commission.

According to a CNN/Kaiser Family Foundation poll on race in America, 69% of blacks and 57% of Hispanics say past and present discrimination is a major reason for the problems facing people of their racial or ethnic group. And 26% of blacks and 15% of Hispanics said they felt that they had been treated unfairly because of their race or ethnicity at their place of work in the past 30 days.

But proving discrimination is another thing. In 2014 alone, the EEOC received 31,073 charges alleging race-based discrimination, but dismissed 71.4% of them due to a lack of reasonable cause.

While workplace discrimination can be as overt as moving an employee off of a key assignment, or failing to promote them even though they are qualified, it can also be very subtle and very difficult to prove, experts say.

Take "implicit bias," where someone of one race may unconsciously treat someone from another race differently. For example, a white worker who becomes anxious around a black person. Then there are "microaggressions," or tone-deaf comments about a person's race or ability, like expressing surprise at how articulate a Latino colleague is. 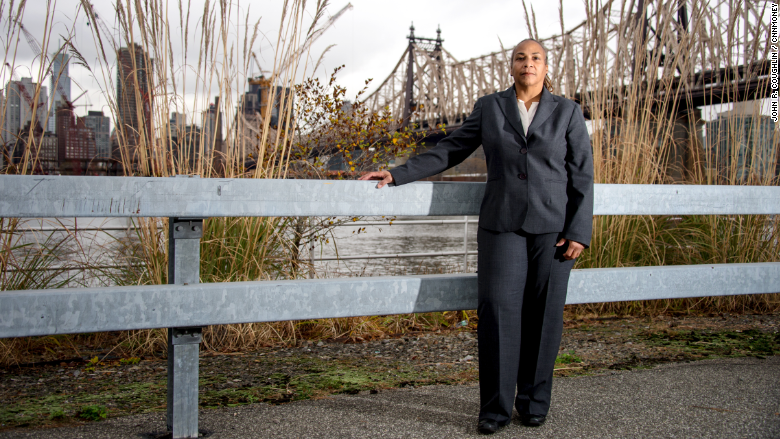 Monica Harwell said she paid a price for pursuing her dream of working outdoors.

For Harwell, it was a combination of experiences.

Among the indignities Harwell claims she faced were having to urinate in the woods because there were no bathrooms for women in the field and being called "that bitch" or "the girl". According to Harwell's complaint she was once taunted by a colleague who "repeatedly joked about an offensive racial remark made on the radio by Don Imus about the Rutgers women's basketball team."

Despite the harassment, Harwell said she wanted a supervisory role in the field, one of the most lucrative positions at the company.

She said she took jobs that gave her the experience she needed to move up and earned a series of degrees in night school, including an associate degree, a bachelor's degree, a master's degree and a certificate in electrical engineering.

But Harwell claims it was never enough.

"In virtually every case of Con Ed rejecting her applications, the successful applicant was a White man who was less qualified than Ms. Harwell by experience, education or both," Harwell's complaint alleged.

Ossai Miazad, a partner at Outten & Golden, the law firm representing Harwell, said that the discrimination complaints the firm has received against other employers include "a lot of men and women in mid-level positions who are hitting a very low glass ceiling." And for many of them, Miazad said, filing a lawsuit is often the last resort.

In a statement, Con Edison said that the utility was "committed to maintaining a workforce that promotes diversity, inclusion and equal opportunity" and noted that minorities comprised 48% of employee promotions in 2014 and that 30% of its officers and executives were women.

Allan Drury, a communications representative from Con Edison wouldn't address Harwell's claims directly, but said in an email that the company would "respond to the suit in court."

When confronted with a discrimination claim, employers rarely admit the issue was about race, Miazad said. Instead, they may try to rationalize their behavior by picking apart an employee's qualifications or performance.

One of the first things lawyers look for is whether the employer is being equally abusive toward all employees or just certain employees, said Tom Harrington a principle at The Employment Law Group, a law firm that handles discrimination cases. For example, a white male employee might be rewarded for being outspoken while a black female employee might be considered "uppity", or out of line, for the same behavior.

Indeed, women of color face biases unique to their racial or ethnic background as well as their gender, said Joan Williams a professor at the University of California Hastings College of the Law who has conducted studies on the implicit biases that women of color in science, technology and engineering jobs face. 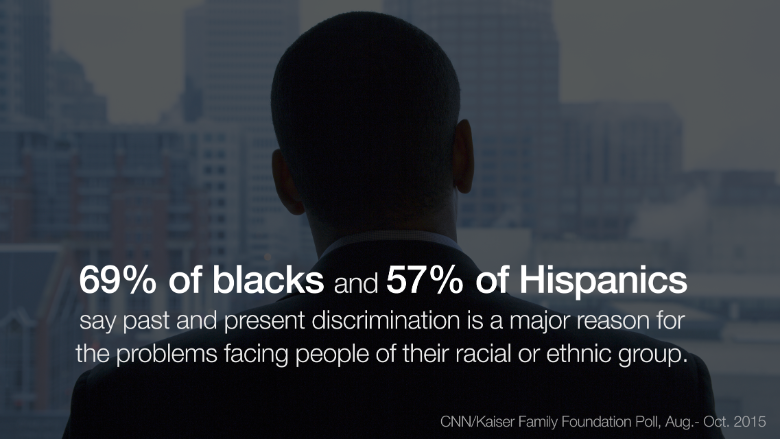 While 66% of the women scientists Williams studied (including white women) reported having to provide more evidence of competence than men, 77% of black women said they experienced that. "Black women often feel like they can't make a single mistake," Williams said. "They would lose all credibility."

Women scientists and engineers of color also faced challenges when having to walk the line between being assertive and being feminine in their workplace.

According to Williams' study, 41% of Asian women said they felt pressure to behave in "feminine ways," while just 8% of black women said they did. In addition, 36% of white women and 28% of Latinas reported pressure to behave in "traditionally feminine roles." When a Latina is assertive or "behaves in ways that don't conform with expectations of femininity, she triggers a racial stereotype," that she is "hot-blooded," irrational," "crazy" or "too emotional," Williams said. In fact, 60% of Latinas surveyed said they experienced backlash when they expressed anger or weren't deferential.

Asian women have their own stereotypes to contend with, Williams said, and are sometimes viewed as suspicious and untrustworthy.

Laboni Hoq, the litigation director at Asian Americans Advancing Justice, noted the case of Sherry Chen, who worked at the National Weather Service in Ohio. In 2012, one of Chen's colleagues raised suspicions that she was spying for the Chinese government, sparking a federal investigation.

A grand jury indicted Chen on eight counts, including theft of government property, illegally accessing a computer database and making false statements. The U.S. Attorney ultimately dismissed all of the charges against Chen. However, in a letter to the director of the National Weather Service, Chen's attorney, Peter Zeidenberg, a partner at Arent Fox, said part of the suspicion against Chen was based on "racial profiling," and the fact that one of her colleagues called her a "Chinese national." (Ms. Chen is an American citizen of Chinese descent).

The U.S. Attorney's office in Ohio declined to comment on the case.

Blocked from the beginning

Minority applicants are often discriminated against before they even get their foot in the door.

According to the CNN/Kaiser Family Foundation poll on race in America, 27% of blacks said they felt they had been denied a job they were qualified for compared to 20% of Hispanics and just 9% of whites.

Earlier this year, the advocacy group Restaurant Opportunities Centers United, published a report on the restaurant industry which found that white applicants were given longer job interviews than non-white applicants. White applicants also reported being treated in a friendlier manner than applicants of color and were twice as likely to be offered employment. 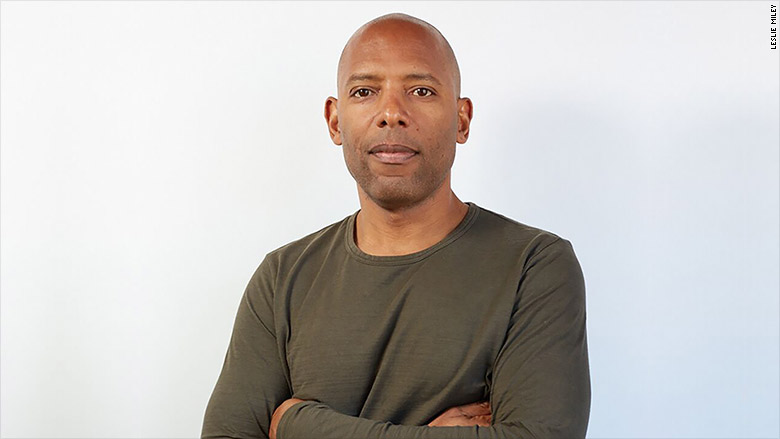 Leslie Miley recently wrote about a lack of diversity at Twitter.

Employees of color who advocate for more diversity in hiring can also face challenges. Leslie Miley, a black engineer at Twitter who recently left the company, wrote about his experiences as one of the few black employees there. Hiring committee meetings "became contentious when I advocated for diverse candidates," Miley wrote. "Candidates who were dinged for not being fast enough to solve problems, not having internships at 'strong' companies and who took too long to finish their degree."

Miley said diverse candidates were hired only after "hours of lobbying." The majority of those hires performed well, he said.

A Twitter spokesperson declined to address Miley's post directly, but instead offered a statement from the company highlighting "the expansion of our inclusion and diversity programs, diversity recruiting, employee development, and resource group-led initiatives."

In August, Twitter published a blog post outlining the racial demographics of Twitter's employees. Of the company's executive team, 72% were white and 28% were Asian. Overall, just 2% of employees were black, while Hispanics made up mere 4%. The company said that by 2016 it expected to increase the percentage of minorities across the company to 11% and minorities in leadership roles to 6%.

Alex Roetter, a senior vice president of engineering at Twitter penned his own response to Miley's piece saying that he wanted Twitter "to be a place where all employees feel comfortable raising questions about diversity. That hasn't always been the case, which is unacceptable."

Erica Foldy, an associate professor at New York University and author of the book The Color Bind: Talking (and not Talking) about Race at Work, said that while many companies have the right anti-discrimination policies in place, their good intentions are failing. "Workplaces are rife with microaggressions," Foldy said.

Part of the problem, particularly in hiring, is that employers look for the right "cultural fit," Foldy said, which often means someone who is similar to the person doing the hiring.

As more non-white workers try to move up in the professional ranks, workplaces are going to have to grapple with these issues directly, Foldy said. "Providing more safety and more comfort for people of color is actually going to make white people feel more threatened," Foldy said. "Organizations have to be able to make it through that period."

The CNN/Kaiser Family Foundation poll was conducted August 25 through October 3, 2015, among a random national sample of 1,951 adults, including 501 Black and 500 Hispanic respondents. Results for all groups have been adjusted to reflect their actual national distribution. Interviews were conducted on conventional telephones and cellphones, in English and Spanish, by SSRS of Media, Pennsylvania. This poll was jointly developed and analyzed by CNN and staff at the Kaiser Family Foundation (KFF). Results for the full sample have a margin of sampling error of plus or minus 3 percentage points; for results based on African Americans or Hispanics it is plus or minus 6 percentage points. Read more about the poll.